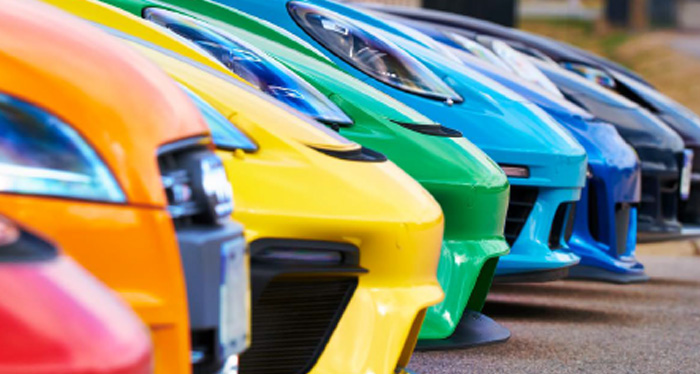 It’s often said, when you really love something, you want one in every color.

Johns Manville (JM) employee Shaun Seela, a Senior Server Administrator in Littleton, CO, and his husband, Scott Pedram, got to experience that very notion when they coordinated a Pride Month-themed photoshoot for members of the Rocky Mountain Region Porsche Club of America in June.

The idea of a Pride-themed Porsche photo was sparked when the pair, during Thursday night and frequent weekend club events and gatherings, noticed that nearly every color of the rainbow was represented by a member’s vehicle, assembling the makings of possibly the coolest (and fastest) homage to Pride Month, ever.

So, Shaun and Scott – who own a Porsche Macan and Spyder – began approaching fellow club members about constructing a Porsche rainbow, and soon floated the idea to the editor of the club’s magazine, High Gear, for possible inclusion during the publication’s June edition.

The pair wasn’t sure how fellow members might react to the idea, Seela said, noting the majority are not part of the LGBTQIA+ community.

“Some are LGBTQ and some are allies. We didn’t know how people would react, but we went for it anyway. They were all in,” Seela said. “It was a go.”

Following about a month of coordination, RMR PCA members assembled in an empty parking lot on a chilly morning in April, lining up their luxurious and sporty wheels just so, to capture the rumbling rainbow.

“It took quite a while, making sure one car wasn’t sticking out more than another,” Seela said. And the results, are “pretty amazing. We are super excited.”

The photographs – and an accompanying article written by Scott – grace the front cover of the publication as well as spanning the centerfold of the magazine, which is distributed to the club’s 3,300 members. RMR PCA is the seventh-largest Porsche club in the country.

The most difficult part, however, might have been keeping the project under wraps ahead of High Gear’s release date, Seela said.

“It was hard to keep it a secret,” he said. “We kept asking people, ‘Please don’t post this on social media,’ and as far as I can tell, nobody did.”

Seela said membership in a car club is a great way to “have fun with people who are like-minded.”

“If you are an enthusiast of any kind of car, you should get into it,” he said.